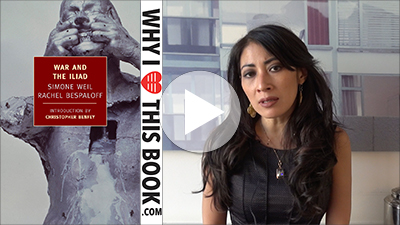 "This book gave me the courage to write my own story about 1965 in a way that is not black and white."
Laksmi Pamuntjak, 44, schrijfster, Jakarta


Bestel War and the Iliad hier

Hier gaat War and the Iliad over

War and the Iliad is a perfect introduction to the range of Homer's art as well as a provocative and rewarding demonstration of the links between literature, philosophy, and questions of life and death. Simone Weil's The Iliad, or the Poem of Force is one of her most celebrated works-an inspired analysis of Homer's epic that presents a nightmare vision of combat as a machine in which all humanity is lost. First published on the eve of war in 1939, the essay has often been read as a pacifist manifesto. Rachel Bespaloff was a French contemporary of Weil's whose work similarly explored the complex relations between literature, religion, and philosophy. She composed her own distinctive discussion of the Iliad in the midst of World War II-calling it her method of facing the war -and, as Christopher Benfey argues in his introduction, the essay was very probably written in response to Weil. Bespaloff's account of the Iliad brings out Homer's novelistic approach to character and the existential drama of his characters' choices; it is marked, too, by a tragic awareness of how the Iliad speaks to times and places where there is no hope apart from war. This edition brings together these two influential essays for the first time, accompanied by Benfey's scholarly introduction and an afterword by the great Austrian novelist Hermann Broch.